The following works are exhibit throughout the conference:
The Listening Post: Nightscapes of Cairns by Matthew Buttacavoli and Sebastian Lowe, 2018
Upstairs in The Cairns Institute

LAKA by Rosealee Pearson and S. Shakthidharan, 2018, projection
Downstairs in The Cairns Institute

The Centre for Native Title Anthropology will be holding a pre-conference Assembly.

17:30-19:30   Opening film: Island of the Hungry Ghosts
The Cairns Institute, D3-054
In the middle of the Indian Ocean, 50 million red crabs make their ancient annual voyage from the jungle to the oceans edge. While thousands of asylum seekers are detained indefinitely in a high security facility. Poh Lin, a trauma counsellor living on the island, bears witness to the decline of those being detained. A lyrically political exploration of the power of story and ritual, Island of the Hungry Ghosts has been winning multiple awards on the festival circuit, including best documentary at the Tribeca Film Festival and the Adelaide Film Festival.
Screening to be followed by a video discussion with the director, Gabrielle Brady, and Poh Lin.

19:30-21:30   Opening Night Reception featuring ERBERYEWEN
The Cairns Institute, D3-Foyer
The conference will kick off with performances by ERBERYEWEN, West Papuan musicians and singers based in Darwin and Papua. 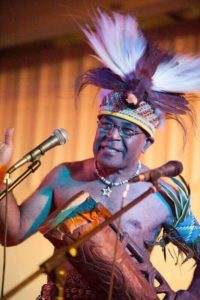 09:15-10:45   Keynote lecture:
Ethnographic responsibility in the age of depletion
by Lucas Bessire
Crowther Theatres, A3-001 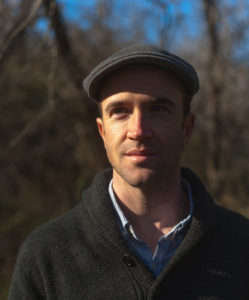 How might ethnographic knowledge suggest ways beyond the conjoined crises of ecologies, democracies and hermeneutics that define the contemporary? To explore this question, the talk offers an experimental ethnographic account of aquifer depletion on the U.S. Great Plains. It charts how depletion accretes over generations to become a porous threshold of belonging indistinguishable from partisan and epistemic divides. In doing so, it offers a wider reflection on ethnography’s capacity to illuminate anti-essentialist approaches to the social worlds emerging along frontiers of destruction and change.

Hear about Wiley’s newest product, the Wiley Digital Archives, which includes a fully searchable digitisation of the Royal Anthropological Institute archive. See how Wiley Digital Archives can be used as a research and teaching tool and take a look how at this new resource provides access and discoverability to the RAI collection.

The #metooanthro collective, with support from AAS, are working to propose an update to the AAS Code of Ethics with a policy that: addresses the possibility of gendered and/or sexual violence in the field, and commits to zero tolerance of gendered and/or sexual violence in professional settings. With an eye to institutional and cultural change, this endeavour takes after the AAA’s release of a comprehensive sexual harassment policy in June, 2018. All conference attendees are invited to this workshop to provide commentary and input on the developing draft. 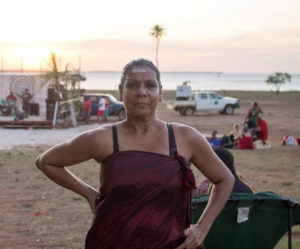 Translation: ‘Wik Blood Speaks to You’
A 20 minute multi-modal performance narrative depicting a process of repatriation led and experienced by the descendant researcher. Using (but not limited to) spoken word, movement vocabulary and accompanying imagery Wik Cha’Pra will present through creative processes a contemporary song line depiction from an auto-ethnographical methodological standpoint. Wik Cha’Pra is in Wik language: Cha Tru Chath’ is in (Alngith language). The title demonstrates dual connection to both languages of Western Cape York as inherited through the researchers maternal lineage. 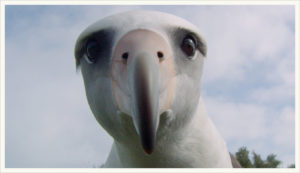 Albatross (2018) dir. Chris Jordan, 97 mins
A multispecies love story about birds on Midway Island in the Pacific whose bodies are filled with ocean plastic and a photographer determined not to look away.

10:45-11:15    Book launch:
Dreams made small: the education of Papuan Highlanders in Indonesia
by Jenny Munro

For the last five decades, the Dani of the central highlands of West Papua, along with other Papuans, have struggled with the oppressive conditions of Indonesian rule. Formal education holds the promise of escape from stigmatization and violence. Dreams Made Small offers an in-depth, ethnographic look at journeys of education among young Dani men and women, asking us to think differently about education as a trajectory for transformation and belonging, and ultimately revealing how dreams of equality are shaped and reshaped in the face of multiple constraints. 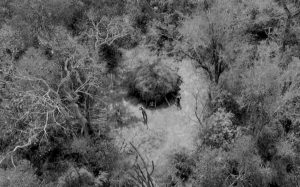 The Ayoreo Video Project:
Ujirei (2017), dir. Mateo Sobode, 52 mins
Farewell to Savage (2017), dir. Lucas Bessire, 70 mins
Lucas Bessire will present two films from the Ayoero Video Project. Ujirei is an experimental film created by Ayoreo filmmaker Mateo Sobode that visually explores the forms of life generated despite and through colonial violence in Paraguay. Farewell to Savage uses footage from the video workshop, a drone and archival footage shot by the filmmaker in this place a decade prior to craft a non-linear reflection on the power of visuality to provoke new ways of relating to the world, each other, and alternate versions of ourselves.

Join the ANSA Annual General Meeting over lunch, to discuss the year’s progress, the future of ANSA, and vote in the new executive committee.

I will speak about the impending demise of Tayap, a Papuan language spoken in the Sepik region of Papua New Guinea, that currently has less than fifty active speakers. I have worked with Tayap and its speakers for over thirty years, and will describe the social and linguistic processes that have led to its dissolution. I will also ask what the death of Tayap means: in general terms, in relation to the current wave of language extinctions that are occurring across the globe; in specific terms, in relation to the people who are losing their ancestral tongue; and also in terms of how anthropologists and linguists might engage with a phenomenon like language death in our work. 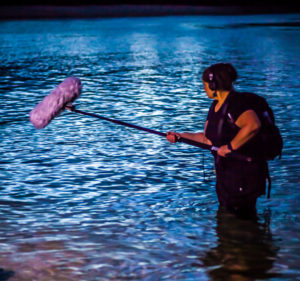 Requiem for the Reef in an immersive surround sound performance that explores the past, present and possible futures of the Great Barrier Reef – one of the greatest natural wonders of the world. The work draws on local voices and ecoacoustic hydrophone (underwater) recordings submerging listeners in the sonic environment of this diverse and fragile ecosystem. The recordings are being used for biodiversity monitoring and are part of a large-scale interdisciplinary research project designed to explore sound as a call to action in ecological crisis. Requiem for the Reef reflects on acidification, extinction and the urgent need for interdisciplinary action.

Please join us for the 2019 Annual General Meeting of the Australian Anthropological Society. This is an opportunity to hear from our members and make decisions about the direction of the Society for the coming year.
Do you have ideas about how the AAS should respond to important current events? Want to hear more about the Society’s support for member-proposed public anthropology projects? Would you like to see more events like Anthropology Day? Does the future direction of TAJA and the wider landscape of academic publishing interest you? These are some of the exciting topics that we will be discussing at the AGM — and we want to hear from you!
Any further queries about the Annual General Meeting of the AAS should be directed to the Secretary, Caroline Schuster (caroline.schuster(at)anu.edu.au)

This year we have opted for a party with live music on the edge of the Trinity Inlet.  In keeping with the theme of the conference the menu will feature vegan, locally sourced food and a chilled though not-quite-vegan welcome cocktail (both alcoholic and non-alcoholic).
Map: http://wharfonecairns.com.au/contact-us/

The Mermaids, or Aiden in Wonderland (2018), by Karrabing Film Collective, 26 mins
Only Indigenous people can survive the toxic landscape so the white fellas steal ‘mud children’ to experiment on in the hopes of finding a cure. One such mud child, Aiden now returns to his ancestral lands, where the mermaids were meant to protect him. But the mermaids are being targeted too.

This roundtable seeks to thematize alternative conceptions of the relation between animality, nature, happiness and politics by exploring notions of the common and eternal life in light of Franciscan theory and earth law. 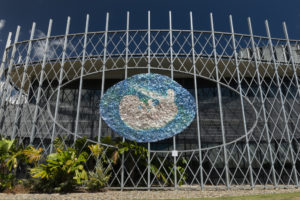 The aim of this work of art is to magnify the impact of plastic on life forms and the delicate systems that support life on Earth. Some might say that microplastics are out of sight as they cannot be seen without magnification. But, eco-toxicologist Heather Leslie (2015) has demonstrated that plastic particles can pass through the placenta and the blood brain barrier. Plastic particles can also be taken up in the gastrointestinal tract and lungs, potential sites where harm can occur including immune-toxicological responses, altering gene expression, and causing cell death. 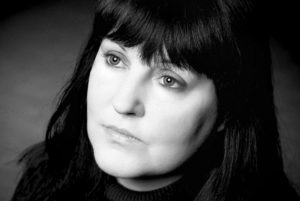 This talk will explore recent the current discussions in the European Union to ascribe ‘robot personhood’ to machines and other arguments for extending the juridical legal franchise to include robots and AI as ‘persons’. Personhood as means to legally extend rights to nonhumans is celebrated as a way of abolishing hierarchy, not just between humans (women, working men and people of colour), but of creating a new field where artificially agents are given rights and recognitions. Is this marking a new culture of life where humans and nonhumans coexist as equivalent beings? Or does it mark a culture of death where all are encased in an ‘Iron Cage’ held together under a new constitution of property relations?
Charting the rise of the person as a legal concept, to how it has changed over time, included and excluded, and to what political and economic ends. The Western political franchise began exclusively with white male property owners in a hierarchical system, but over time, legal personhood was extended to other categories of human, including white non-property-owning males, freed slaves and women. Persons, can be corporations, and rivers, but can they be robots and AI programmes? I will explore contemporary liminal spaces – such as the commercial prostitution industry – where bodies are not fully civil, but also property and the connections of these practices with the rise of artefacts as substitute intimate others, where person and property become interchangeable. 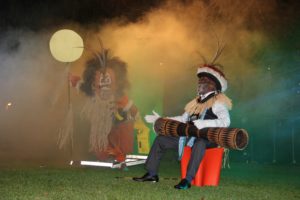 The Torres Strait is an asset for the world’s life support system. But the region’s people are facing a number of serious challenges including rising sea levels, extreme weather and poor health outcomes. To foster the mobilisation of research knowledge, a group of Torres Strait Islander researchers commenced the Meriba buay – ngalpan wakaythoemamay (We come together to share our thinking): Evaluating a Community of Practice for Torres Strait Islander Health and Well-being Project. Our network explored the use of research and experiential knowledge with the help of our traditional Torres Strait Islander Elder and Cultural advisor/Storyteller and together we developed an arts-based performance.
The scenario for the performance is… Woer Wayepa – the water is rising.
It’s 2050 and a tidal surge has sunk the last of our Torres Strait Island homes beneath the depths of the rising sea. Culture clings to a lifebuoy… Is there anybody out there? 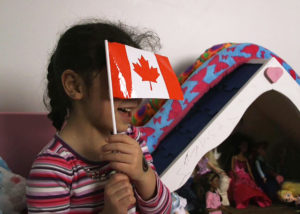 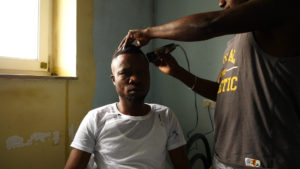 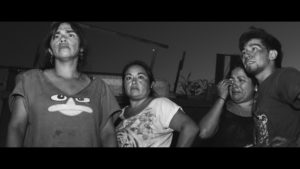 Strangers Ourselves (2018), dir. Laura Murray
Eighty-six-year-old Elizabeth Rapley, the filmmaker’s grandmother, has sponsored ninety-two refugees since 1979, helping them resettle in Canada. What are the challenges both for the families who are accepting help and for those providing it?

Limbus Patrum (2018), dir. Alessandro Mangione, 20mins
In response to the heavy migration flows to Italy, the former facilities of the Ferrandina Scalo station (Basilicata) were transformed into a waiting centre for single men seeking asylum in the country. This film is dedicated to Ehis, Abdul and Henry, and their daily struggles.

Grabbing Dignity (2017), dir. Felipe Roa, 32mins
Grabbing Dignity (Dignidad en Toma) is about how human dignity is perceived by marginalized urban squatter families in Santiago, Chile, who have recently been relocated from a squatter areas into a subsidised housing project. The film raises a discussion where ‘house’ cannot be understood as equal as ‘home’.

Powered by Khore by Showthemes
This site uses cookies: Find out more.